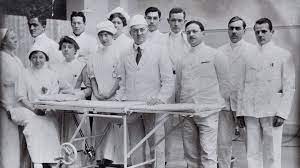 This is part two of ‘War and Medicine’. Read part 1 here.

In my previous post, I talked about the advancements made in emergency care during the war that helped saved thousands of lives.

But what happens after that? what happens to those who have received extensive damage to their bodies and faces?

Plastic Surgery wasn’t practiced as a specialty before the first world war. The work was usually done by the surgeon who received the case. However, since the Battle of the Somme, injuries of the face had increased significantly, and then another medical field focused on the treatment of such injuries had been developed. With improved aseptic surgery and general anesthesia, plastic surgery is also less dangerous.

During the War, doctors like Harold Gillies and Auguste Charles Valadier, revolutionized facial reconstructive surgery. Their work changed the lives of thousands of soldiers as well as people who suffered from facial injuries.

Along with treatment for injuries, the First world War also saw a widespread use of preventative measures.

From a pre War vaccination rate of 5% among the soldiers, the First World war saw the rates of vaccination against typhoid go up to 90%.

During the conflict, soldiers were provided with antibacterial washes to stop the spread of disease.

Soldiers were also encouraged to maintain personal hygiene and keep their uniforms clean. A clean uniform meant that there is a smaller chance of a gunshot wound or a shrapnel wound getting infected. The war also saw a increase in availability of quality antiseptics on the frontlines.

Silver Lining of the Yellow Cloud of Terror.

The conflict saw widespread use of Chemical weapons, resulting in about 30% of the war’s casualties. One such weapon was known as ‘Mustard Gas‘.

Mustard gas causes 80% of all chemical weapon casualties during WW1, named after its peculiar smell, which resembled that of garlic and mustard, it was a yellow-green/ yellow-brown gas. It is a cytotoxic blister agent, i.e. it killed living cells and caused blisters to form on its victims.

Mustard gas is highly mutagenic and carcinogenic, which means it can cause cancer. Ironically it was later developed to become one of our best weapons in the fight against cancer.

Mustard Gas or Sulphur Mustard had become and effective weapon due to its cytotoxic nature. It killed cells that absorbed the gas, but was exceptionally effective at killing rapidly dividing cells. Cancer cells ARE rapidly dividing.

Mustard gas was later experimented on, and one of its derivatives, ‘Nitrogen Mustard‘ is still used as a chemotherapy drug, to fight cancer.

Even through the horrors of war, Humanity not only persevered, but also managed to find things that would improve lives. Yes, war is bad, but even the bloodiest conflicts are not enough to break us.

This was the last part of ‘War and medicine’ make sure to check out the first part, as well as other posts about military tech. Subscribe to The Startech for more stuff about technology and how it has affected us. 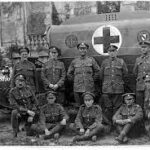