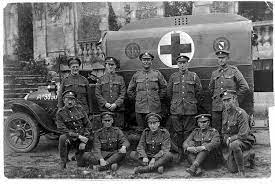 The First World War was unlike anything humanity had seen before.

With the development of machineguns and heavy artillery, it is still considered to be one of the bloodiest conflicts in history.

The novel artillery obliterated the flesh and bones of the unfortunate soldiers close enough to an impacting shell.

The machineguns shredded through men in their thousands.

Worst of all, was the silent, yet devastating mustard gas- A yellow-brown cloud of terror.

Amidst this carnage, a system of transporting casualties to medical facilities and providing emergency care as fast as possible had become the top priority of the medical personnel.

The sheer number of casualties seen during the Great War forced the factions to create an efficient emergency care system. Transportation trucks and other vehicles were turned into ambulances and were used on a large scale for the first time.

The already two-time Nobel prize winning scientist Marie Curie came up with the idea of Mobile X-ray units. These units used the vehicle’s engine to power an X-ray machine which allowed medics to assess internal injuries.

Along with the ambulances and Mobile X-ray machines, the war also say extensive use of blood transfusions. Initially, blood transfusions were conducted directly from donor to recipient, as stored blood would just clot and become unusable.

But it was impractical to use this method on the front line. The war gave rise to effective methods of blood storage. For example, paraffinizing the insides of glass vessels, and using Citrate as an anticoagulant. As a result, Blood could be stored for up to 26 days without any negative effects.

US Army Captain Oswald Hope Robertson also showed that stored universal donor or cross-matched blood could be given safely and quickly to forward medical units.

At the beginning of the First World War in 1914, getting a femoral fracture, had an 80% mortality rate.

Pioneering surgeon Hugh Owen Thomas, often described as the father of British orthopedics, invented the ‘Thomas splint’ which by 1916, had reduced the mortality rate of femoral fractures from 80% to a survival rate of 80%.

The Thomas splint has remained practically unchanged and is still used to this day.

read more about the Thomas splint

The War completely changed the way emergency care was provided and helped create a system to ensure the patient the best odds of survival.

The bloodiest conflict of its time, showed us how to save lives and many medical procedures today have their origins in those developed during the First World War.

This is just part 1 of ‘War and Medicine’. Stay tuned for part 2 which will focus on the ways improving the quality of life of victims of war, as well as an unexpected miracle treatment that saved the lives of thousands. 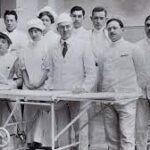 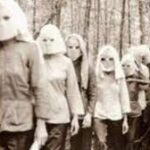