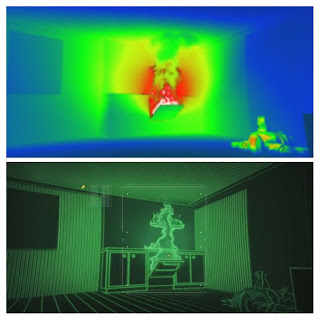 Hi All,
I was not able to keep up with time in these recent days. Hence my slagging in publishing the latest content for which my sincere apologies. But don’t worry guys, because I will try and make it up for you bringing you up to date on all technological developments. Presently, enjoy this post : The Vision of Vision

The last time, we had discussed AI RaceCars, a dream come true for me! A driverless car beating the World Record Speed of human drivers. I mean, talk about sci-fi coming to life… Can’t imagine the inspiration and fire that must be motivating these great minds.

But, talking about fire, as in actual Fire, there have been quite many deaths of common civilians and brave fire-fighters who went forth willingly even in a glimmer of hope. And I must say it was about time, this industry was revolutionized too.

By a national census, every 3 hours, at least one person dies due to accidental fire. The United States especially has lost 3000 people to fires in their homes, consistently for 30 years. Otherwise, bluntly put, the USA has lost 90,000 people in the last 3 decades.

P.S. This is more than the population of Bhutan, but hey, no pressure…

Just like in the nationally recognized fire incident, the Worcester Fire, more than 10 firemen were lost simply because each pair went in to save the earlier pair but each and every pair was nothing but lost. But being lost was just an aftermath of the inability to see. As a matter of fact, the biggest challenge as a firefighter is to face complete invisibility; to move forth even an inch, you have to feel your way if you are not stepping or going to trip over something. As a result, any fireman is especially given the training to overcome disorientation of his mental state on any such conditions of lack of vision, or depletion of oxygen. Thus came forth a driving motivation for something new, something that would change the history of firefighting history : C-Thru.

Its creator, Sam Cossman, CEO and Co-Founder of Quake Technologies says that the ability to “looking at things through a new lens” is one of the most important things that helped him envision it. When he first came to know that firefighting involves training their personnel to feel their way around the room, he was in complete incredulity. That was his true inspiration for C-Thru.

Part globetrotting adrenaline junkie, part computer engineer, the self-proclaimed Indiana Jones of tech was the first to envision a device. Something that looked like an X-Ray vision.

Sam says that the real C-Thru deal is working for literally flipping the lights on for people operating in nil-visibility conditions. So, what it BASICALLY provides is enhanced audio(like Iron Man’s Helmet), enhanced vision(actually like THE Vision). But on the inside, all that it has is a mask and a thermal imaging device and then comes in the computer which processes the images, and outputs them as objects with green outlines.

Just a pointer: someone who asked, “Hang on, where’s the AI in all of that?” is someone who has truly been reading my posts and has given them some serious thought. Well, to answer you guys, there is indeed some slick A.I. at the process here, and you guessed it right, it’s in the tiny computer on the side of the mask. These computers stream images from the thermal camera into an A.I. processor. This processor uses Infrared light and a really powerful edge detection algorithm. Thus, the mask detects subtle changes in brightness to detect certain shapes that are hidden from the human eye. Shapes such as a wall hidden by smoke, or a kid hiding under a bed.

Now, I ask you to just sit back and think for a while. And then comment below if this wasn’t a game-changing tech. A tech that would save millions of lives in the long run.

…hope you enjoyed this extensive read which just might have sparked an innovative “fire” in your mind.
And don’t forget to tell me if you understood the title of this post.
#Actuating imagination for the better __ A.I.

See you guys on a new day with some new revolutionizing tech.