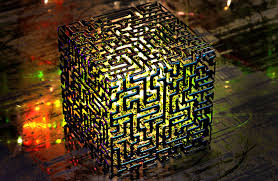 In today’s world with the advancement in technology, the world of computers has reached its peak with entering the realm of quantum computing.

Traditional computers consist of transistors. These transistors are no longer enough to keep up with the efficiency required by us humans. The solution to this was to reduce the size of these crystals. Today these transistors are so small almost the same size as an atom. This small size gives rise to a new effect known as electron tunneling. This effect makes it impossible for the transistor to go beyond the limit to how small they can become. This limit of transistors does not satisfy human needs. Therefore to go beyond this limit, physicists came up with a new way for computers i.e Quantum Computing.

Quantum computing as the name suggests is computing at the most basic level, the quantum realm. The normal computer makes use of “bits” to store data, these bits can hold two values 1 or 0. Now, this bit was something not up to the mark of normal scientists. It can hold only 2 values, therefore with 3 bits, the maximum number of combinations we can have is 8. This meant that for a  large amount of data you have to make use of so many bits. These were the two main reasons which gave birth to Quantum Computing.

Quantum Computing instead of the normal bits makes use of something known as “Qubit”. This qubit is superior to the normal bit. A normal bit as aforementioned can save values of either 1 or 0. A qubit can also do the same. Though a qubit is superior since it exhibits a quality known as superposition. Superposition means a qubit can store a linear calculation of 0 and 1. This gives a qubit a vast number of combinations. Some data that would require millions of bits can be stored in just a few hundred qubits.

The use of qubits not only helps to reduce the number of bits but also in other ways. If you were to search some data within a bit, you have to all bits for a match. Though if you perform the same task with a qubit, superposition makes the process must faster. This makes searching with qubits much faster. All in all, qubits are much more efficient than the normal bits.

These qubits are a two-state quantum-mechanical system and may help us in unraveling many mysteries of the quantum level. One of these is the theory of time crystals.

Time crystals, as the name suggests is a crystals. A crystal is nothing but a pattern of particles repeating over space. Space is one of the dimensions, another dimension is time. Therefore physicists thought that if a pattern can repeat over time, it should also repeat over time. This gave the name time crystal. Therefore in simple terms, a time crystal is something that changes its phase over time in a pattern. That means it is at a specific phase at one point in time and some other phase at another point in time. All of this needs to take place without any input of energy making a time crystal essentially a perpetual motion machine. This is a big no-no in physics and breaks the law of physics. Though this didn’t deter physicists. Today Google has successfully created a time crystal within a quantum computer.

Again this has been done with the help of qubits. Qubits as aforementioned are two-state quantum-mechanical systems. When these qubits are arranged and a ray of energy is passed through them, it causes the qubit to change its phase. Now peoplemight say that energy is being passed and as per the definition of time crystals, this isn’t correct, but here is the catch. These time crystals don’t absorb any of the energy and reemit all of it. Therefore this acts as just a trigger and no absorption takes place.

Quantum computing, being a relatively new field with a lot of things to explore definitely seems like will bring a new era of computer and physics enthusiasts.