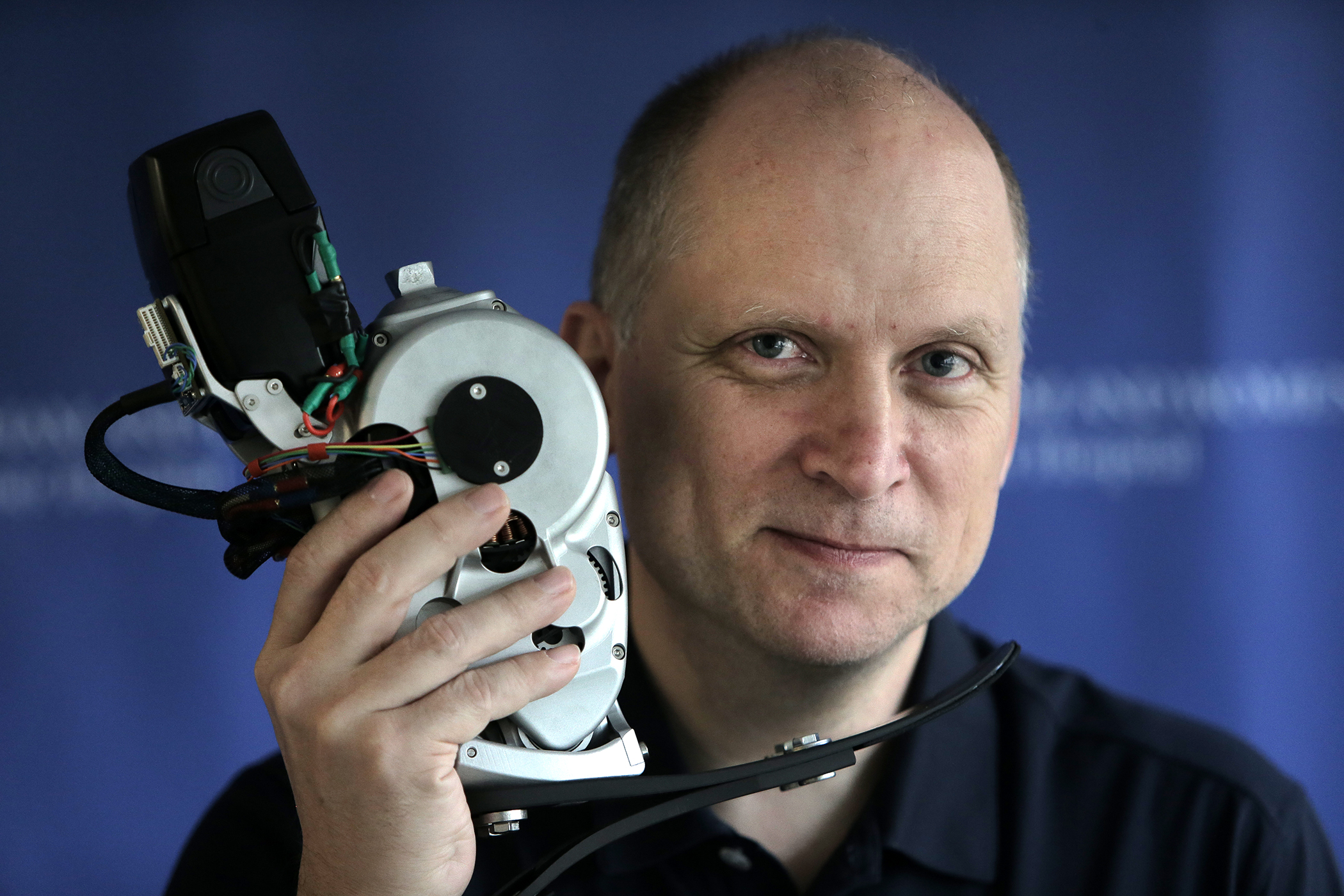 Boston, MA - 11/21/16 - Jim Ewing with the robotic prosthetic. After a fall while rock climbing, Jim Ewing (cq) suffered traumatic injuries to much of his body, especially his left ankle. A special amputation surgery, the first of its kind, allowed his nerves to interface with a robotic prosthetic foot. He and his doctors are confident that he will be able to "feel" the actions of the motorized limb, giving him far greater capabilities than he would have with standard prosthetics. (Lane Turner/Globe Staff) Reporter: (in caps) Topic: (22brigham)

Hi All, In my last post, we paid our respects to Tim Shaw – An ALS Warrior, whose passion was not simply for Football but for fighting back in general. And also, thanks to his relentless efforts, the future of ALS Diagnosed Patients was altered to great heights. But today we will be talking about Jim Ewing for whom rock climbing was not just a passion, it was more of a lifestyle.

Starting rock climbing from his early teens, this was his way of de-stressing himself from life. And soon, eventually but surely, disaster struck!

In 2014, a family tour to the Cayman Islands definitely did not go as planned. After doing a couple of climbs, Jim had the ropes set for a final one. His daughter and wife climbed up, but as soon as he started up, his feet slipped and he fell. A straight drop down of 50 feet!!

Already having minimal expectations out of the situation, the reports were not exactly encouraging. He had his front and back pelvis shattered. And, if I can, I’ll say that that was not important. Instead, what was important was the fact that his left wrist and left ankle were broken into 2 but most of it was pulverized.

A year of medical attention passed and everything was overall healed. All except the shattered ankle. The mainline of fracture just didn’t seem to heal. It was time to conclude that the bone had died. Ready to finally come face-to-face with his future, Jim accepted that this was going to be life-changing. For the better or worse depending on his perception and reaction.

And as rare as this sentence is, I just have to use it in this case. Because indeed, Jim’s past came to help him!!!

Hugh Herr, a climber from the age of seven, who had a similar accident at 17 had both his legs amputated. But a fighter by spirit, he dedicated himself to the betterment of the Bionic Industry. All to help out the millions of people around the world. And a few decades later and a couple of M.I.T Degrees later, a mind dedicated to innovation, he launched the prosthetics industry into the Bionic Future.

Getting in touch with Hugh was an attempt to reach out to someone who could fix his leg. But, on evaluation, he received two options, each individually destroying. He could either live on with his throbbing biological limb that continued to scar his conscious with constant stimulations of pain. Otherwise, he could amputate it.

And you can have my word when I say that there will only be a handful of people that would make a choice like that of Jim.

In his several years of dedicated hard work which one might also call penance, Hugh had developed a quite bold procedure of amputation. This procedure was going to be tested out first hand on his friend, Jim.

This novel procedure involved regular amputation procedures except that the motor and receptor nerves were reconnected to each other forming a link on amputation. The idea behind it was such that the attached bionic limb would read these sensations sent to the muscles of the now amputated limb and work accordingly. Another plus point was that the wearer would actually feel the sensations that he felt before amputation even after the procedure. And as a matter of fact, what Hugh was doing at the moment was out of the world at the time. Actually, to an extent, I can say it was from the future.

And you guessed it right this time, this bionic limb works on Machine Learning. But what’s different is that in this specific case, machine learning is what can be referred to as a subset field of Artificial Intelligence. Commonly put, machine learning is learning from experience. And this experience is nothing but data, loads of it. In fact loads and loads of it. And this learning gives an output corresponding to a specific input, which is a “decision”.

The New Way of amputation innovated by Hugh Herr!!!

This reconnection of nerves provided a bi-directional flow of impulses with which creates natural dynamics. The ‘How’ is a bit complicated…

The A.I., along with its subset Machine Learning created a virtual model of his limb. So, if and when he fires his muscles, the ricochet is recorded by an electrode. This record, on measurement, drives the bionic limb exactly as much expected and desired by Jim’s brain. And as a plus point, it also gives Jim a sensation about its position and dynamics. Thus giving his brain a faint recollection of his lost limb. And also supporting the imagination of his next climb…

…hope you enjoyed this extensive read which just might have sparked an innovative fire in your mind. After all, I do write my blog to bring these latest innovations, not into the limelight but the common light. And at the same time to remind you, people, that there do exist people who are just as crazy as you…

#Actuating imagination for the better of the future __ A.I.

P.S.:-
All expressions in this post are copyrighted to the author (Hriday Kharpude ©).