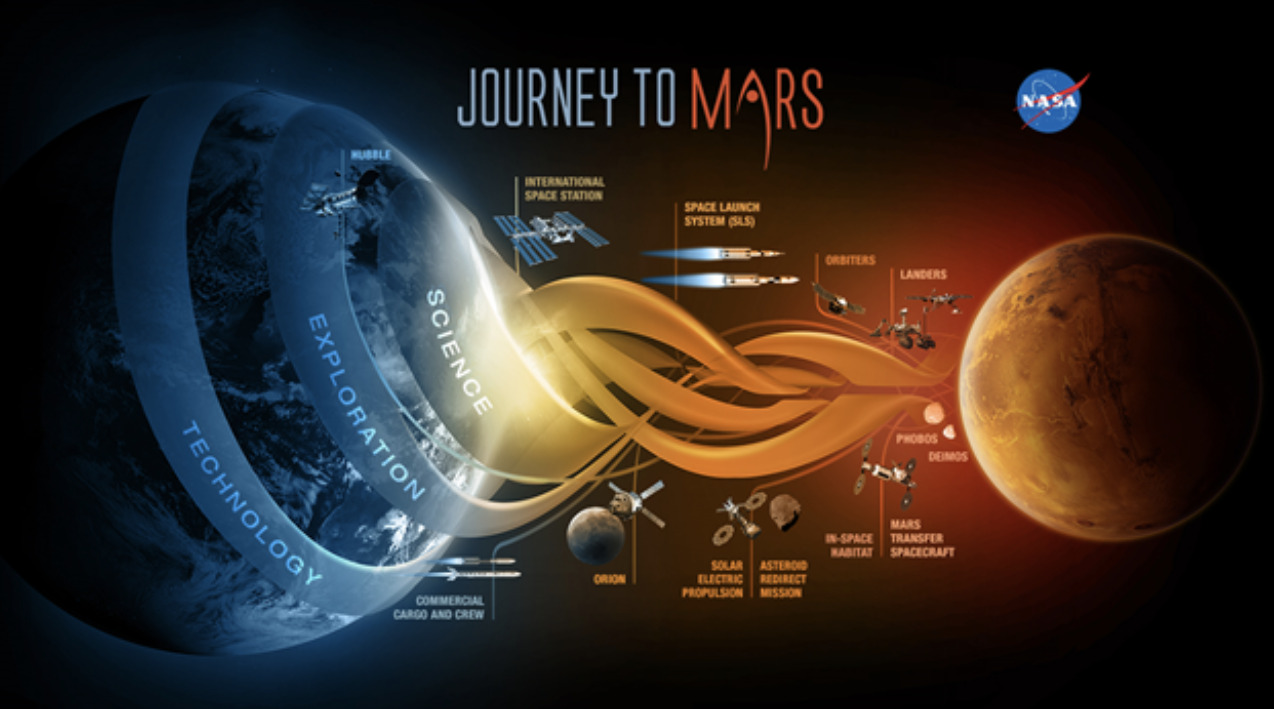 Hi All, I know it’s been a while since my last post, but let’s just cut to the chase… Have you guys ever imagined or even wondered about 3d printing? As in a machine on its own following a path going about printing material in a definite way creating a uniform structure. Well, then this post is for all those ingenious minds out there who, like me, visioning themselves at the peak of the A.I. industry, having contributed tremendously to the world.

It all started in NASA’s 3D-Printed Habitat Challenge. Just the way I felt, the title is not self-explanatory so you might just pass by thinking that it’s no big deal. Right? But here’s what it actually is…

As for outer space travel, if we just talk about Mars, it takes 6 months to get there in a short capsule-like compartment that might be smaller than the bathrooms in most of our houses. Once you get there, you are out of contact with Earth and have to patiently wait there for at least 2 years for the planetary positions to align themselves which is followed by an equally short trip of JUST 6 months to get back to Earth.

The Cabinet Smaller Than Our Bathroom!!!

Now a general mind would get fascinated or probably horror-struck by such atrocities, but a sharper mind would firstly think about how in the world are we going to stay in a capsule-like compartment for two years. So, if you caught along all of this explanation, let’s go back to the title NASA’s 3D-Printed Habitat Challenge. Now, pretty self-explanatory right!!! Even more so if you know that NASA has a Milestone laid in front of it which says :

“So, the challenge is to build a Habitat fit for Mars…right??”

“For half a million dollars!!!”

“That’s it, I have heard enough, send me there. I’ll manage the rest”

“NO!, how do you plan on living on Mars while constructing a Home??”

That’s right, that’s the rub falling off of it. You cannot build a habitat and send it there on a rocket, nor can you send materials enough to build a home over there. Nor can you keep sending rockets over rockets cause just building a rocket costs a fortune, forget about launching one. That leaves us with a single open option. Building a Machine or rather A.I. that can build a whole home #AUTONOMOUSLY. (If you think you know any other method, call a Psychiatrist before calling me😉).

Now, before you start imagining a humanoid robot picking up a brick and placing it on a place with gravity less than a third of the Earth, let me tell you that it’s gonna be a 3D Printer. But that does not eradicate the problem of how do you send building materials to mars.

So before I tell you how this problem was solved, let me tell you it was not solved by me (Pfft! Obviously). It was solved by a team of architects with Jefferey Montes, as Project Leader. He says and I quote, “When we build in space, every little material has a lot of value of it, so we need something as strong as possible but as light as possible.”

As a result, since we humans are at a loss of Home Depots on Mars, this machine itself needs to find, process, and create the material themselves on Mars. In plain terms, we have no other option but to use the material that we actually find on Mars as well as Earth. The result was an idea that was also suggested to improve life on Earth: Building Harvesting.

Again, not self-explanatory titles, it is not farming in a building, but building a building by farming.

Hehehe…if you still don’t get it, stay in touch for the next post…

Btw, you guys anyway need to stay in touch with the next post cause we just got to know about why and with what we are building… So, personal advice, DO NOT MISS THE HOW???👨‍🏫